For most traditional Christians there is of course no such thing as “the Divine Feminine”, the phrase being an invention of late twentieth century feminist spirituality, however, that is not to say that traditional Christianity is entirely lacking a feminine counterpart to the Divine. In the Orthodox/Catholic tradition the title “Mother of God” - inherited from various pre-Christian deities,  including Isis and Diana - establishes Mary above all other created beings, her veneration stopping just a little sort of that worship reserved to the blessed Trinity, though it might be observed that for the average person in the pew the dividing line between veneration and worship is negligible. 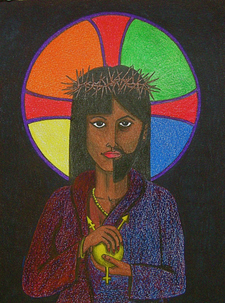 "Neither"
Undoubtedly, traditional Christianity, like its parent Judaism and its half-sibling Mithraism was, always has been, is, and always will be, intrinsically  “patriarchal” to some extent. To pretend otherwise would be to do irreparable violence to the tradition. It is perhaps also noteworthy that the new feminist spirituality of “the Divine Feminine” is largely a product of Protestant and secularised countries. There is no need - and little demand -  for it in Mediterranean or Latin American countries where there is a strong devotion to Our Lady. As far as the landscape of the soul goes, Protestantism is a barren land from whence the Lady was well and truly banished, hence the efforts of mainly anglophone feminist theologians to rediscover a feminine side of God, in the Holy Spirit or the mysterious Old Testament figure of Sophia (Divine Wisdom). This reconstruction is generally seen as unnecessary for traditional Catholics and Orthodox for whom Our Lady was never dethroned, though the more hardcore feminists believe that even the figure of Mary, as created by the patriarchal church, is disempowering for women. For those who believe, like Mary Daly, that “when God is male, the male is God” nothing short of complete iconoclasm will ever be enough. The icon, above right, entitled "Neither", is a good visual example of this mentality. 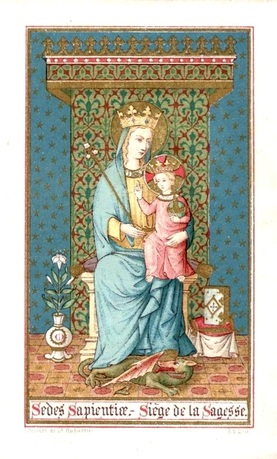 Our Liberal Catholic tradition on the other hand indicates a gentler way, perhaps indeed a more  sophiscated way, in exalting “the Holy Lady Mary” as “the World Mother”.  The title has never satisfactorily been defined, but generally I think it is safe to say that Liberal Catholics intuit a strong connection between the Old Covenant  Sophia and the New Covenant Mary, some even seeing Our Lady as the embodiment of Divine Wisdom. Some of us would even go so far as to say that just as Our Lord Jesus Christ is a perfect reflection or image of the Solar Logos, the second person of the Holy Trinity, so the Holy Lady Mary is a perfect reflection or image of the Holy Spirit, the third person of the Holy Trinity. So in that particular and qualified sense we may speak of "The Divine Feminine".

The esoteric figure of Sophia (Wisdom) has both earthly and heavenly attributes; “Sophia Nigrans”, symbolised by the Black Madonnas, might be equated with Mother Earth, whilst one might see Mary, Queen of Heaven, as “Sophia Caelestis”, that Divine Wisdom which was with God, hovering over the primordial waters of creation. Thus, in honoring both the dark and light Madonnas, Liberal Catholics help to heal the rift between the body and sexuality affirming earth mysteries and the equally natural urge of humans to reach for the stars and ascend to the Father’s home. I would maintain that for many of us, Wisdom consists in reconciling this paradox - the royal road home to God is both within and below as well as without and above.

This spirituality may be experienced but does not lend itself easily to formal definition, which many would argue is a particularly masculine approach anyway. Theology is after all an art and not an empirical science. Perhaps it is better just to reflect on the mystery of the World Mother rather than seek to contain her in a formula, for it should be obvious that if honouring the Heavenly Mother means anything it means passive reflection and imaginative creativity rather than the creation of more rigid dogma.
(Rt Revd Dom Alistair Bate OSBA, KTPP - 13th Sept. 2015)

It may help to remember that just as the Cosmic Christ is based on the historical Jesus but not limited to him, so the Cosmic Mary is much bigger than Mary of Nazareth. The gospels may not stand up to modern methods of historical scutiny, but the experience of Jesus and Mary in the hearts and lives of believers is something that has built very powerful thought forms over two millenia. For those of us who have a fervent Marian devotion our faith is based just as much, if not more, on appearances of Our Lady (particularly those over the last couple of hundred years) than on the historical Mary. The Jewish Mary (not Arab or North African, but Jewish) has given us a model of Catholic womanhood rooted in piety, humility and service, whilst the Cosmic Mary, who most often appears as European (though certainly not exclusively) is a great spiritual teacher and wherever she appears recommends the rosary as the primary means to connect with her and grow towards union with Her Son. The distinction between the historical and the cosmic Mary is clearly articulated in the prayer taught by the Lady of All Nations to Ida Peerdeman in Amsterdam in 1951. The original form of the prayer was suppressed by the Roman Church in 2002, but it still circulates, I guess because people perceive its deeper truth. Here it is: 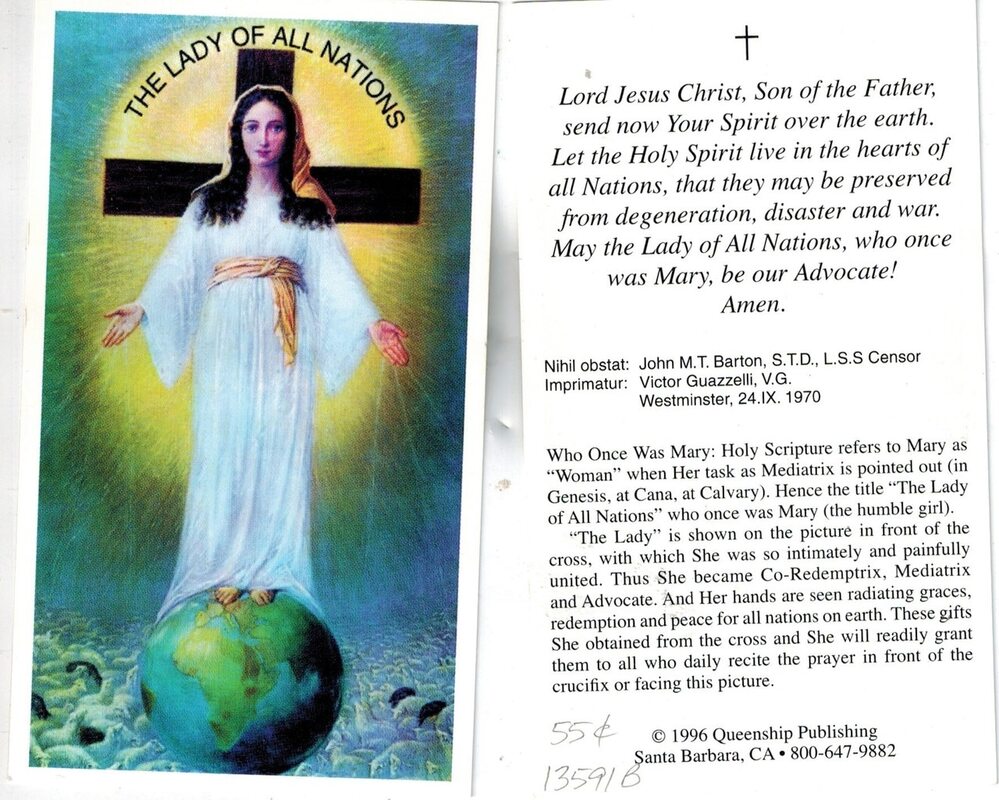 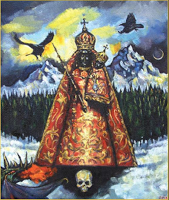 O THOU most high, who art the deepest mystery, may we open our hearts to thy wisdom, that was before heaven and earth existed, thy wisdom which is the eternal virgin mother of the light. May we venerate divine motherhood in all creation and may all our actions bear the mark of thy wisdom and love. Amen. 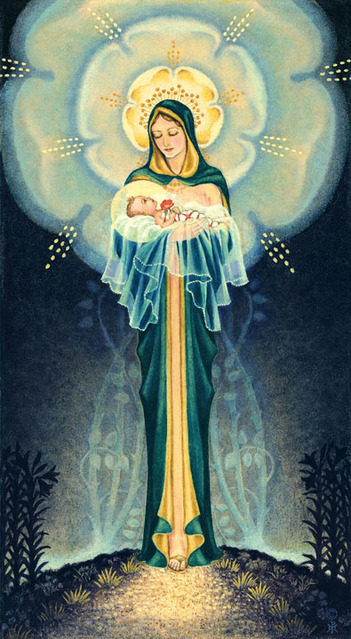 Our Lady of the Night
​Hail Holy Queen, Mother of Love!
O Gentle, O Kind, O Blessed Mary,
Thy children on earth call unto Thee.
We pray Thee beloved Mother,
To cast forth Thy net of woven starlight.
Fling it wide across the ocean of the universe
To gather us home to the realms of Light.
To Thee do we lift up our hearts.
Turn then, most gracious Mother,
Thine eyes of compassion toward us,
and lead us unto the blessed friut of Thy womb, Jesus.
O clement, O Loving, O Sweet Virgin Mary. Amen.
Powered by