The Flame Keepers of Holy Bride 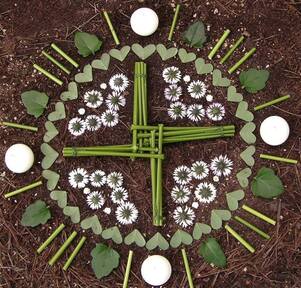 St Brigid of Kildare lived from circa 450 to 525 A.D. Named after a Celtic Goddess - Brigid, Goddess of Poetry, Smithcraft and Healing Arts - the Christian Saint and the Goddess which preceded her share many of the same characteristics. Brigid is patroness of Ireland and is also honoured throughout the British Isles and in many parts of mainland Europe. In Britain she is more often known as Bride.

The monastery of Kildare, of which St Brigid was the first Abbess, famously kept a sacred fire burning within its precincts from the 5th to the 16th centuries and in the 20th century this custom was revived by the Brigidine Sisters in Kildare. Tau Blaise, the Master of the Holy Celtic Celtic Order of the Temple, received the Sacred Flame from the Sisters in 2010 and since then has been giving candles lit from the "Kildare candle" to pilgrims who visit St Gall's Retreat in Switzerland. The Flamekeepers of Holy Bride were founded in 2019 as a group of devotees who are called to keep vigil for one hour each week (as may be convenient for them) before the Sacred Flame in honour of Holy Bride and in intercession for those who have asked for our prayers. Membership is normally drawn from the general membership of the Holy Celtic Order of the Temple and Avalonian Druidcraft. A candle blessed with water from St Brigid's Well in Kildare and lit from the Kildare candle at our Mother House in Switzerland may be sent to each Flame Keeper on request.

As the first grade of the Holy Celtic Order of the Temple is dedicated to the Avalonian mysteries, and being "Flame Keepers of Holy Bride",  we especially venerate  St Bride of Beckary, near Glastonbury, for according to legend St Brigid of Kildare established a hermitage there in the early 6th century, where she was known as St Bride. Dion Fortune writes in "Glastonbury, Avalon of the Heart" as follows:

" ... St Bride too, sweetest of solitaries, had her cell at Beckary, a low rise of ground beyond Wearyall. There she left her weaving-tools behind her, and a few years ago a bronze bell of most ancient workmanship was found there by a shepherd, and was given by him to Chalice Well for the Chapel, where its two sweet notes used to give the call to prayers, morning and evening. That it was a woman's bell is certain for the finger holes by which it is held are so small that only a woman's fingers could use them. .....

It was at Beckary that King Arthur, summoned by a dream while sleeping at the nunnery on Wearyall, saw the marvelous sacrament wherein the Holy Child was Himself the holy sacrifice upon the altar, laid there by his mother. It was there, in Bridget's Isle, called "Little Ireland", that Our Lady gave to Arthur the wondrous crystal cross, which afterwards was taken by him to Glastonbury Abbey. This crystal Cross he graved upon his shield, silver on green, in memory of the graciousness of the Queen of Heaven, and later the monks of the abbey made it their badge also, and it can be seen to this day quartered with their arms." 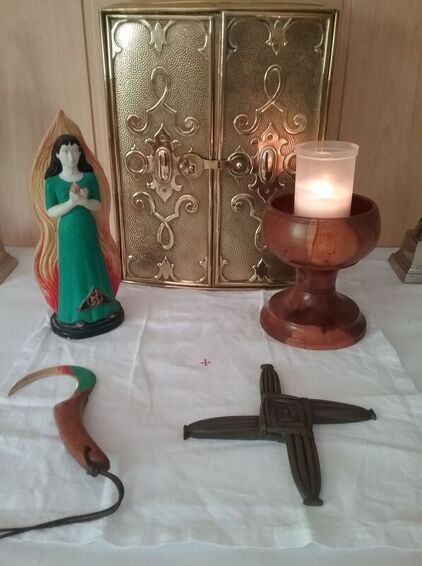 Keeping the Sacred Flame at St Gall's Retreat, Switzerland
Brigid,
You were a woman of peace,
You brought harmony where there was conflict.
You brought light to the darkness.
You brought hope to the downcast.

May the mantle of your peace
Cover those who are troubled and anxious,
And may peace be firmly rooted in our hearts
And in our world.
Inspire us to act justly and to reverence
All God has made.

Brigid, you were a voice for the wounded
And the weary,
Strengthen what is weak within us,
Calm us into a quietness that heals
And listens.
May we grow each day into greater
Wholeness in mind, body and spirit. Amen. (Brigidine Sisters, Kildare) 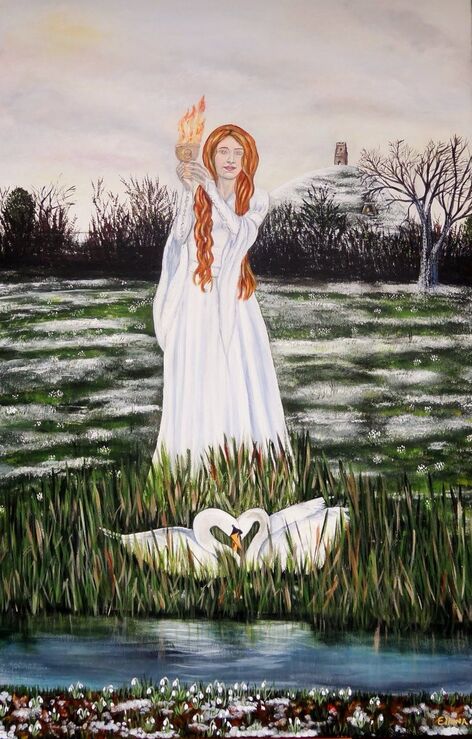 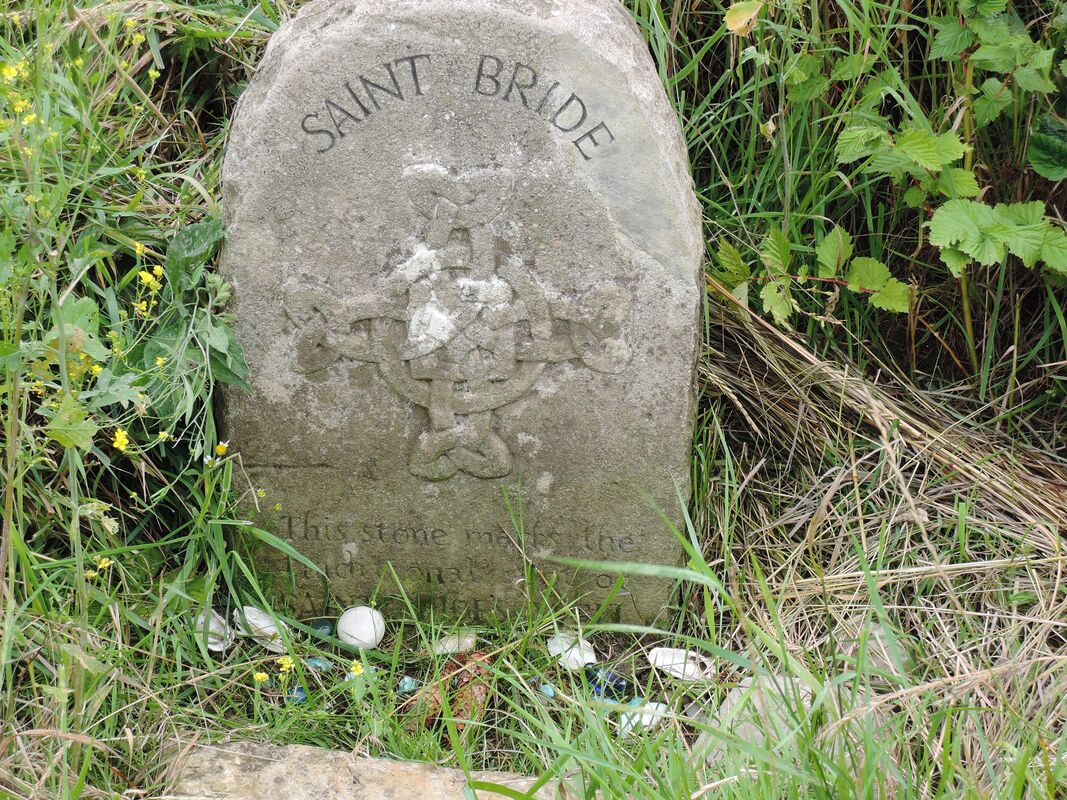 On St Bride .... from "The Western Mystery Tradition" by Christine Hartley 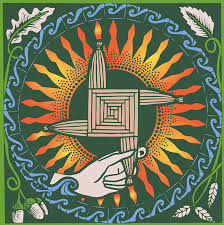 "And the third great person we have to remember in considering those of the old gods who have come down to us is Bride or Brigit. She was, you will remember, a daughter of the Dagda; the transition from goddesshood to sainthood was for her the easiest of things.
She was herself a triple goddess, the beloved of the North and whether she be St Bridget or st Bride she is still the heart love of the true Kelt - the darling saint, as she was the darling goddess.

Originally she was a sun goddess or a fire goddess; all the little attributes we know of her go to prove this. The story goes that she was born at sunrise; a house in which she dwelt burst into a flame that reached up to heaven. When she took the veil as a nun before her sanctification it is reported that a pillar of fire rose from her head - a simple enough transference from a fire goddess. Life-giving was she too, for her breath could raise the dead - true symbol of the sun, the source of all life.

It was because of this simplicity of transition, no doubt, that she has always held her place in the hearts of the peasants. Not for them to understand the difference in religion when the Christian Church brought in its teaching; they might accept what they could not argue with, but at least they kept their darling goddess, even if they now called her a Saint, and she listened to their prayers in her new robe as she had done in the old one. They could still continue to invoke her without incurring the wrath of the new priests and it was an easy thing to settle down to the new regime. 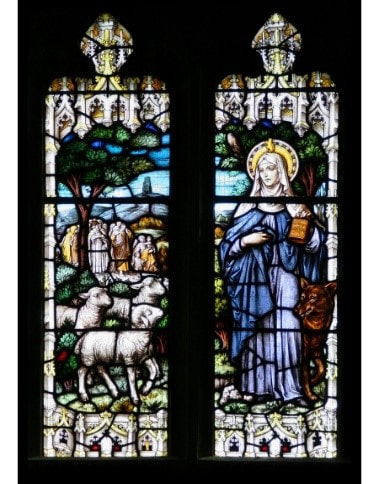 St Bride of Beckary
The sacred flame on her shrine at Kildare was never allowed to go out. Every nineteen days it was tended by the nuns who served her, and every twentieth day it burnt of its own accord. Once in the thirteenth century an accident occurred and the flame was extinguished, but except for that moment it remained alight till the suppression of the monasteries by Henry VIII. The fire goddess was honoured even when her origin had been forgotten.
As a triple goddess, Bride or Brigit was the goddess of poetry, the goddess of Healing and the goddess of Smithcraft - not one would think a very expected subject for her patronage. But if the fire of the forge be remembered then it is highly suitable for a goddess of fire to be served by the smiths.

In Gaelic Scotland they spoke of her as Bride of the Golden Hair, Bride of the White Hills, Mother of the King of Glory, and in medieval Ireland she was known also as 'Mary of the Gael', showing how blended the two forms of worship had become. For Bride is the triad, young and virgin, mature in her beauty and then the mother who is also the slayer since she brings forth life which is death.
​
In the Hebrides, her own islands, whose name is now mispronounced, she is called Muime Chrioso -  the Foster-Mother of Christ. And she is also Bride the Milkmaid, the young moon goddess akin to Isis Hathor and all the other goddesses of that rank. There is an old Hebridean rann or chanty addressed to the cattle of which one verse runs in the translation of Fiona MacLeod:

“The Protection of God and Columba
Encompass your going and coming,
And about you be the milkmaid of the smooth white palms,
Brigit of the golden hair, clustering brown.”

It is said there also that St Bride's Flower, St Bride’s Bird and St Bride's Gift make a fine spring and a good year. Her flower is the dandelion, of the bright gold of the sun, her bird is the oyster catcher, and her gift is the cradle - for Bride presides over childbirth and a birth in spring is good luck for both mother and babe. Bride's own day is the first of February, the eve of Candlemas in the Christian Church - and in her own islands she was greeted by the women in their special manner. A sheaf of oats from the last harvest was dressed in girl's clothing and laid in a basket with a club of wood, representing the male opposite. Then the basket was lifted by the women and carried round the village while they cried 'Bride is come! Bride is come! Bride is in the bed!', welcoming in this way the goddess of the new spring.

One of the best known shrines to Bride in the West Countrv was that of Beckary near Glastonbury. The land round there is still called Brigit's Isle or Little Ireland, Beg-Eri. There it was that Arthur the King had his vision of the Mother of God when she appeared to him as he knelt upon the green grass and gave him a great crystal cross, which became later the property of the Abbot of Glastonbury. It was after that time, according to the legends, that Arthur fought no longer under the shield of the Red Dragon - which is even today the flag of Wales - but under his own device of a crystal cross on a green ground.”

The Sacred Flame of Kildare at Solas Bhride today
For more about the Avalonian tradition please read this article here.
You may also be interested in Avalonian Druidcraft!
Powered by